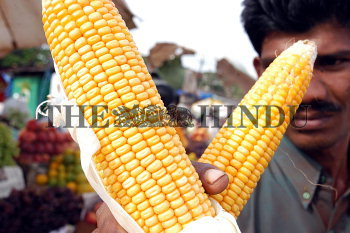 Caption : A vendor displaying maize at a market in Thrissur, Kerala. Maize prices in the country is jacking up every passing day, putting poultry feed manufacturers and maize traders in a tight spot. Being the leanest season for maize crop arrivals and the delay in the release of the corn stocks held with the government are the main reasons. Maize acreage this Khariff, though, has increased from 52,20 Ih to 57.33Ih. Photo: K.K. Mustafah 24/08/06