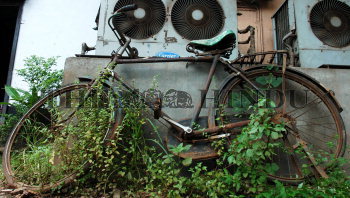 Caption : With more and more two-wheeler companies coming out with new models of motorbikes and banks offering two-wheeler loans liberally, the number of bicycle riders have come down drastically in Kerala. Two-wheelers constitute the single largest segment in the motor vehicles that are being used in the State. According to a study, motorbikes account for nearly 70 per cent of the vehicle population of the State. A scene from suburban Thrissur. Photo: K.K. Mustafah 24/08/06