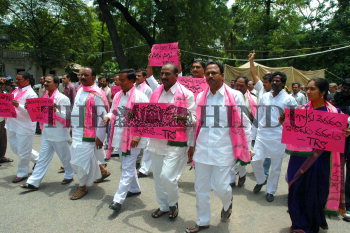 Caption : Telangana Rashtra Samiti legislators coming out after the Assembly session was adjourned for a day,holding placards and raising anti Congress slogans, in Hyderabad on August 23, 2006. The party leaders stalled the proceedings in the House, forcing Speaker to adjourn on three occasions. The party members were protesting against the ruling goverment for not giving chance to discuss the separate Telengana issue. Photo: Mohammed Yousuf