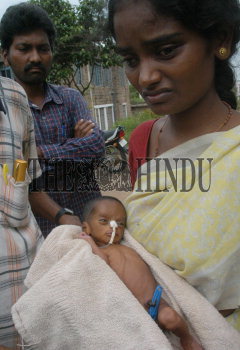 Caption : A five day old male infant, who was brought by his mother from Veeraghattam in Vizianagaram district, with a heart problem, was among many who were asked to leave King George Hospital due to doctors' strike in Visakhapatnam on August 22, 2006. Photo: C.V. Subrahmanyam