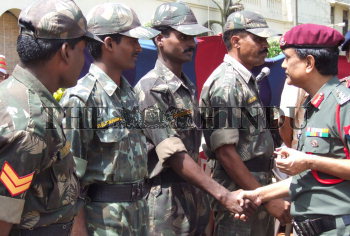 Caption : The Territorial Army personnel being received at the Tiruchi Junction on August 21, 2006. Army personnel and family members accorded a warm reception to the officers and men of the 117 Infantry Battalion, Territorial Army, Tiruchi, when they arrived in Tiruchi after serving at the Rajouri sector in Jammu and Kashmir for the past three years. Photo: R. Ashok