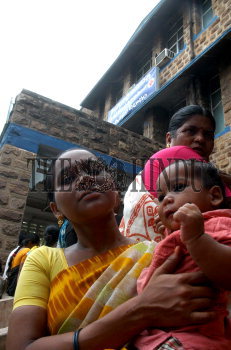 Caption : A woman waits with her child for treatment at the outpatient wing of the King George Hospital,in Visakhapatnam on August 21, 2006 where the doctors and supporting staff are on strike, demanding the arrest of those who had attacked casualty medical officier Bangaraih on August 20., 2006. Photo: C. V. Subrahmanyam