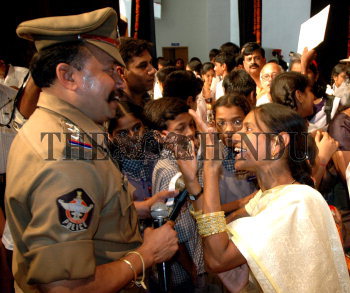 Caption : Saifabad Police Inspector K.V.Ramnarsimha Reddy persuading the angry parents and students on the stage following the departure of Chief Minister Y.S.Rajasekhara Reddy at the Rajiv Gandhi Akshay Urja Diwas at Ravindra Bharathi in Hyderabad on August 20, 2006. The meeting was organised by NEDCAP to distribute certificates in connection with the 62nd birth anniversary of Rajiv Gandhi. Photo: Mohammed Yousuf