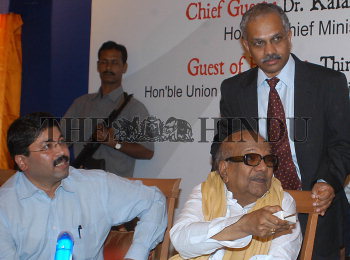 Caption : Tamil Nadu Chief Minister M. Karunanidhi pressing the remote control to lay the foundation for TAPP Semiconductor facility, at a function in Chennai on August 18, 2006. Union Minister of Communications and IT, Dayanidhi Maran (left) and Founder and CEO of TAPP Semiconductor India, P. Raja Manickam, look on. TAPP Semiconductor India will invest about Rs. 1,000 crore over five years in its project at the Sriperumbudur SIPCOT Industrial Park near Chennai. TAPP has asked for 80 acres of land of which the State Government has so far allotted 50 acres and the balance will be allotted soon. TAPP and the State Government signed a MoU for the project in the presence of the Chief Minister at the function. Photo: Bijoy Ghosh