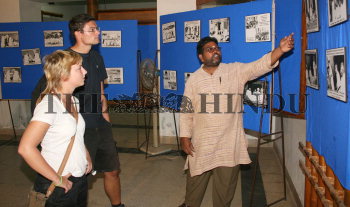 Caption : A group of foreigners looking at the photographs of "Madurai Gandhi' displayed at Gandhi Museum in Madurai on August 18, 2006. A visitor to the Gandhi Museum in Madurai between August 14 and September 7 will know more about not only Mahatma Gandhi, the Father of the Nation, but also the 'Madurai Gandhi' N.M.R. Subbaraman. The three-week exhibition of photographs of 'Madurai Gandhi', organised by the N.M.R. Subbaraman Centenary Committee, has on display 70 photographs, some of which taken during the Mahatmaâs visit to the Temple City. The exhibition also displays letters written by Mahatma Gandhi to Subbaraman. The photograph of the bungalow of Subbaraman at Munichalai, where Mahatma Gandhi stayed during his visit to the city in 1934, is the one that attracts visitors the most. Photo: S. James