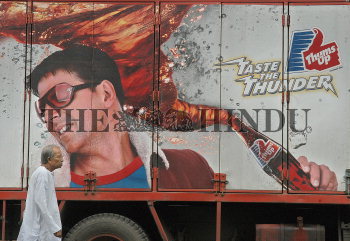 Caption : An elderly Kolkatan passing by the delivery van of a soft drink major in Kolkata on August 18, 2006. The Left ruled State has given a clean chit to soft drinks while many others including Kerala have banned after the recent controversy over pesticide residues in them. Photo: A. Roy Chowdhury 18-8-2006