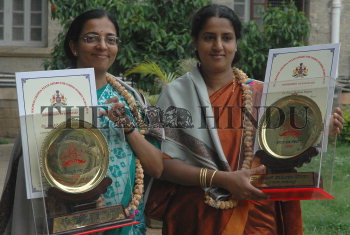 Caption : Dr. Kalpana Chawla State Award for Young Women Scientist awardees for the year 2004, Dr. Mythily Ramaswamy (left) and for the year 2005, Dr. Noor Shahina Begum, proudly POSE, at the distribution of the State awards for Scientists and Engineers for the years 2004 and 2005, in Bangalore on August 17, 2006. Photo: G.P. Sampath Kumar