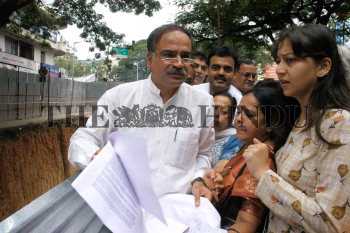 Caption : The Bangalore South MP, Ananthkumar listens to the residents of Malleswaram and film actress Sudharani (right), on the issue of underpass being built at 5th cross, in Bangalore on August 16, 2006. Photo: K Murali Kumar