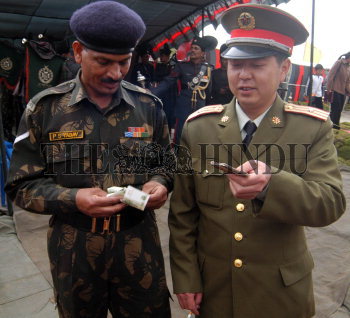 Caption : Chinese Army exchanging money with Indian counterparts during the celebration of India's 60th Independence Day celebration in Bumla, at a height of 15,000 ft. in the Indo-China international border in Arunachal Pradesh on August 15, 2006. An official delegation of Chinese officers and soldiers accompanied by their families joined in the Independence Day celebrations with their Indian counterparts. This event is a positive step towards further cementing the ongoing efforts for improving relationships between ancient civilisations, who are emerging as major partners in developing the Asian region. Photo: Ritu Raj Konwar