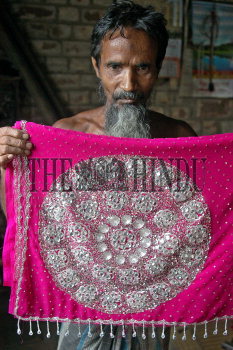 Caption : Sk. Suharab Ali displays the embroidered saree at Manikpur village in Howrah district of West Bengal on August 13, 2006. Earlier, he was involved in electrical job and recently joined his two sons who are engaged in embroidery and designing work for last few years. A large number of villagers are living on this job in Manikpur. The big traders from the nearby town Uluberia, give them the work in contract basis which includes raw materials and labour charges. For designing a saree, Suharab charges Rs.900 to Rs.3000, depending upon its work. Monthly they could embroider 16 to 18 such sarees with the help of four to five labourers. The labourers are paid Rs.6 to Rs.10 per hour. With all this, Suharab and his two sons earn not more than Rs. 6000 to Rs. 7000 per month. But one such saree at any boutique in major cities would cost no less than Rs.4000 to Rs.10,000. The artisans of Manikpur are proud and happy about the work which are well appreciated in Delhi, Mumbai and other big cites in the country and abroad. But, they feel that they are not paid well in comparison of the boutiques, who enjoy the profit of their toil. Photo: Arunangsu Roy Chowdhury