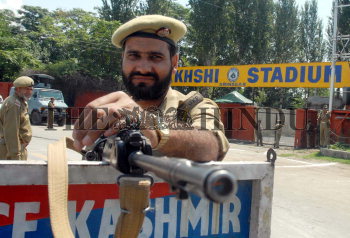 Caption : The Central Reserve Police Force (CRPF) Solider standing Guard outside the Bakshi Stadium in Srinagar during a rehearsal for the Independence Day parade, in Srinagar on August 13, 2006. Photo: Nissar Ahmad