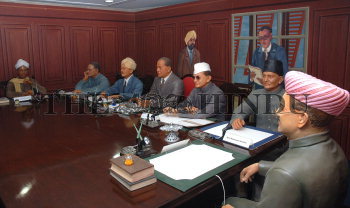 Caption : Scene of drafting of Constitution (from left) Alladi Krishnasami Ayyar, N. Gopalaswami AYYANGAR, N. Madhava Rao and Dr. B. R. Ambedkar at the hi-tech Parliament Museum which depict the democratic heritage of India which will be inaugurated by President, A P J Abdul Kalam on August 14, 2006, during a press preview at the Parliament Library building in New Delhi on August 11,2006. Photo: V. Sudershan