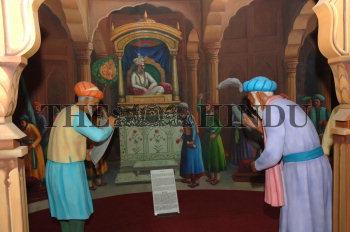 Caption : One of the display depicting Akbar's court at the high-tec Parliament Museum during a press preview at the Parliament Library building in New Delhi on August 11, 2006. President A.P.J. Abdul Kalam will inaugurate the country's first 'story-telling museum' depicting 'Democratic Heritage in India' on August 14th. To be opened to the public by September 1, the Parliament Museum has been designed as a hi-tech story-telling complex where the story of the `Democratic Heritage in India' will be told with the help of walkthrough period settings backed by sound-light-video synchronisation, large screen interactive computer multi-media and multiscreen panoramic projections, virtual reality and animatronics. Photo: V. Sudershan