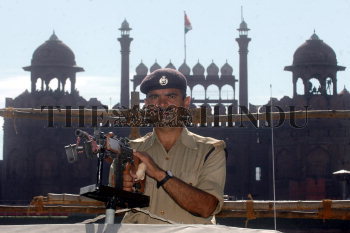 Caption : An alert paramilitary personnel with a mounted machine gun GUARDING the Red Fort during the dress rehearsal for the Independence Day, in New Delhi, on August 10, 2006. The security has been further tightened in and around Delhi to foil the terrorist misadventure. Photo: Sandeep Saxena