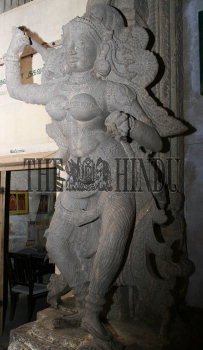 Caption : Reclaiming past glory: The statue of ' Deity Meenakshi in Kurathi' in Meenakshi Sundreswarar Temple Premises in Madurai, which was largely neglected of late, was recently given a facelift and subjected to a chemical wash and reinstated to its former glory by the temple authorities. Photo: K. Ganesan 10-08-2006