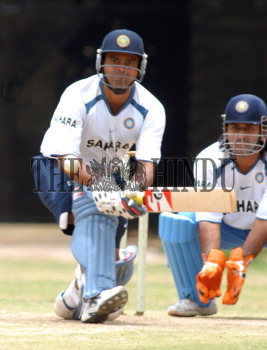 Caption : India's Dinesh Mongia about to play a sweep shot, watched by wicketkeeper M.S. Dhoni, during a practice match at the four-day 'Cricket Skill' Camp at the Chinnaswamy Stadium in Bangalore on August 09, 2006. The Indian cricket team is preparing for the tri-series commencing in Sri Lanka on August 14, 2006. Photo: K. Bhagya Prakash