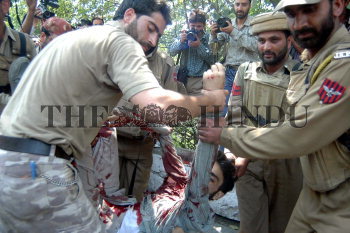 Caption : Police personnel carry the dead body of Kashmiri man, Ghulam Mohammad Sheikh, after he was shot dead by paramilitary troopers in Srinagar on August 09, 2006. Police claimed that they have shot dead a man who they said was preparing to throw a grenade at them. But protestors alleged that Ghulam Mohammed Sheikh was a civilian waiting for a bus. Photo: Nissar ahmad