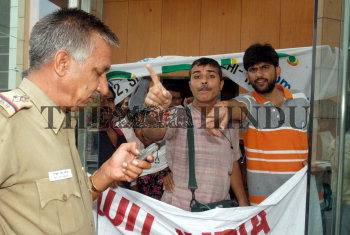 Caption : Members of the Society for People''s Integrated Development who gate crashed into the Asian Development Bank building during a protest demonstration to mark Quit India Movement, which started in August 1942, seen arguing with a Police official when they were asked to leave the premises, in New Delhi on August 09, 2006. Photo: S. Subramanium