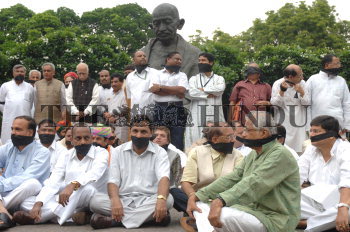 Caption : NDA leaders led by Leader of the Opposition in the Lok Sabha, L.K. Advani, staging an hour long dharna, protesting against Speaker Somnath Chatterjee for reportedly denying them a say, outside the Parliament House, while boycotting the day's Session, in New Delhi, on August 08, 2006. Photo: V. Sudershan