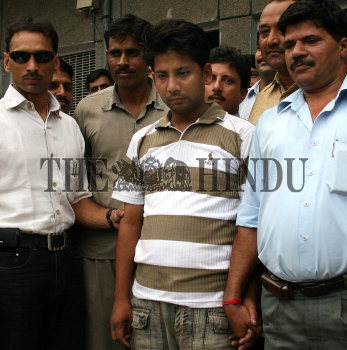 ACCUSED OF SEVEN MURDER OF A FAMILY

Caption : Sanjay Babu (center), accused of seven murder of a family of Om Prakash his wife and five children in Inderalok on 31st July 2006 being produced at chanakya Police Station in New Delhi on August 06, 2006. Om Prakash (45), who ran a small mattress factory at his 'D' Block residence in Inderlok area, and his wife and five children were allegedly killed by a sharp weapon. The assailants also tried to burn the bodies of Om Prakash and his wife Santosh (40) whose partially burnt bodies were found on the ground floor of their house. Photo: Shiv Kumar Pushpakar