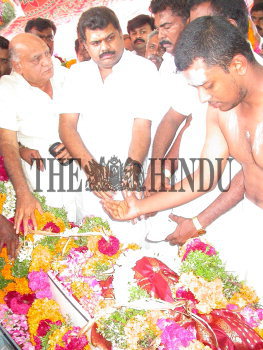 Caption : Union Minister for Statistics and Project Implementation, G.K. Vasan paying his last respect to Indradevi Dhanushkodi Adithyan on August 6, 2006 and consoling the son of the deceased Dhanesh Adithyan while Indradevi was killed in a road accident near Tuticorin on August 5, Photo: A. Shaikmohideen