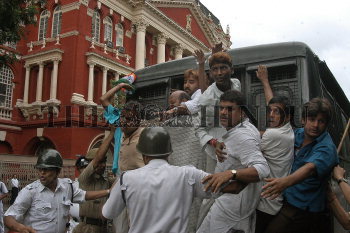 Caption : The Trinamul Congress supporters protesting against the visit of the Assistant Secretary of U.S. Department of State Bureau of South and Cetral Asian Affairs, Mr. Richard A. Boucher infront of the Writers' Building in Kolkata on August 04, 2006. During his visit, he called on the Chief Minister of West Bengal at his office and interacted with the indusrtialists at Indian Chamber of Commerce. Photo: A. Roy Chowdhury