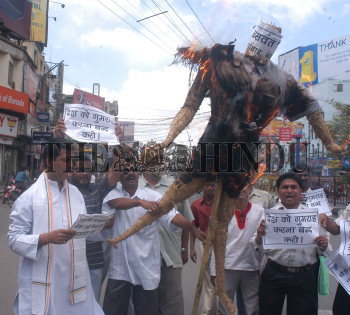 Caption : The Congress party activists burning an effigy of former External Affairs Minister and Rajya Sabha Bharatiya Janata Party leader Jaswant Singh, in protest against his allegation of a presence of a mole in the Prime Minister's office during the time of P. V. Narsimha Rao in the 1990s, in his recently published book , A call to Honour"-In Service of emergent India", in Patna on August 04, 2006. Photo: Ranjeet Kumar