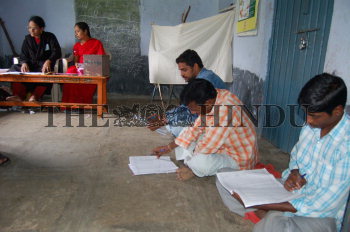 Caption : Polling agents sitting on the floor due to non-availability of furniture at a polling booth in Gopalraopalli village of Sircilla mandal in Karimnagar during the second phase of grama panchayat elections on August 02, 2006. Photo: V. Raju