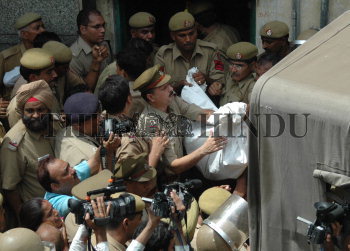 Caption : Policemen remove bodies from the house of Om PRAKASH, who was found dead along with his wife Santosh, daughters Manju, Babita, Doli, Pooja and son Ankit in Inderlok, New Delhi on July 31, 2006. Om PRAKASH (45), who ran a small mattress factory at his 'D' Block residence in Inderlok area, and his wife and five children were allegedly killed by a sharp weapon. The assailants also tried to burn the bodies of Om PRAKASH and his wife Santosh (40) whose partially burnt bodies were found on the ground floor of their house, said police source. Photo: Anu Pushkarna