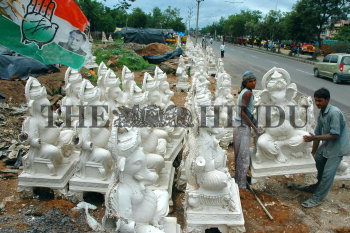 Caption : Ganesh idol makers racing against time to complete their work before the start of the Ganesh puja festival from August lask week. They are mostly migrants from Rajasthan who have set up their camps along the road from Nagole to Uppal. Although they live by the roadside they have ration cards and the government has promised to allot pattas to them. Photo: Mohammed Yousuf 31/07/2006