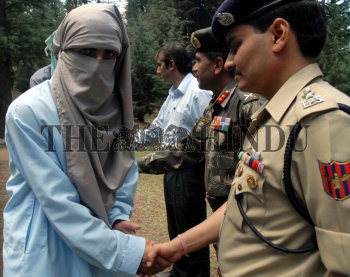 Caption : Militants from Pakistan-occupied Kashmir, who surrendered to the Army, shaking hands with Army officials during the surrender ceremony in Baramulla on July 31, 2006. Tweleve militants who belonged to Hizbullah, Hizb-e-Islami and Hizb-ul-Mujahideen surrendered before Army officials. The disillusioned youths said Pakistan's Inter-Services Intelligence "is using Kashmiri youth as scapegoats for its own nefarious aims and objectives. They don't believe in any jihad." Photo: Nissar Ahmad