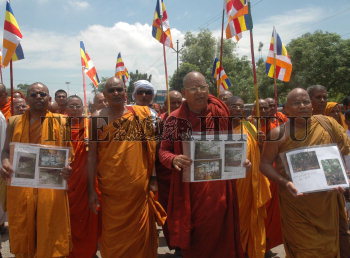 Caption : Buddhist monks taking out a march in Patna on July 31, 2006 protesting against the alleged vandalism of the Bodhi tree in the Mahabodhi Temple at Bodh Gaya. The Bihar Government on July 21, 2006 sent a detailed report to the External Affairs Ministry, categorically denying vandalism of the Bodhi tree. Home Secretary Afzal Amanullah, accompanied by Regional Director of the Agricultural Research Institute, A.K. Singh, inspected the banyan tree following queries from the Prime Minister's Office. Mr. Amanullah showed photographs taken in 2001 to prove that the branch, which was allegedly chopped off recently, had been cut much earlier. He said samples were collected from the stump to establish through carbon dating the exact year in which it was axed. The last recorded pruning of the tree was in 1977. Photo: Ranjeet Kumar