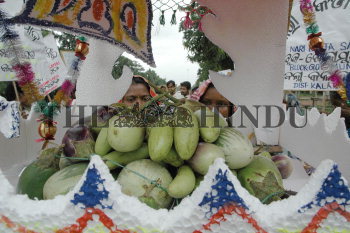 Caption : Tribal women activists of Orissa Nari Samaj demonstrating with Brinjals before the State Assembly in Bhubaneswar on July 31, 2006. They demanded that the organic cultivation should be maintained in the field of largely cultivated vegetables like Brinjal instead of introducing Bt. Brinjal (the first genetically modified food crop) in Orissa. Photo: Ashoke Chakrabarty