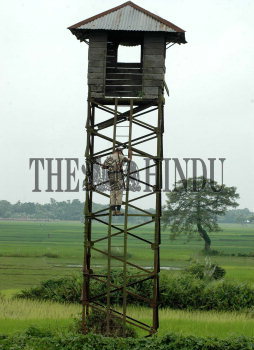 Caption : An Indian Border Security Force (BSF) personnel climbing up in a watch tower in the India-Bangladesh International Border in Sonaghat, Dhubri district of Assam on July 28, 2006. A Minister of Assam has accused Bangladesh of grabbing two square kilometres (500 acres) of Assam's land by shifting international boundary marks. Assam Revenue Minister Bhumidhar Barman says that late July 26, 2006, poor Bangladeshi migrants have encroached on land in the western Dhubri and southern Karimganj districts and we have asked the Central Government to resolve the issue with Dhaka. Centre has already placed the Border Security Force (BSF) on high alert following reports of massive build up by Bangladesh Rifles (BDR) across Karimganj sector. Photo: Ritu Raj Konwar