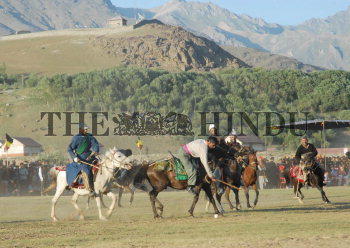 Caption : Local residents wearing traditional costumes play a horse polo match during the army's Vijay Diwas or Victory Day celebrations in Drass 160 kms. (99 miles) east of Srinagar on July 25, 2006. The army commemorates 'Vijay Diwas' annually in memory of more than 500 fellow soldiers who were killed six years ago during a war with Pakistan in the mountains of Kargil and Drass sectors, at the Line of Control on July 27, 2006. Photo: Nissar Ahmad