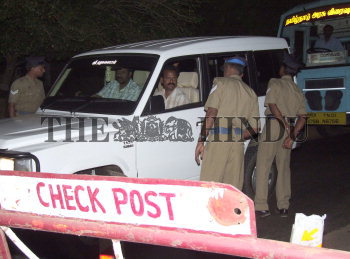 Caption : Police checking the vehicles at Sembattu checkpost in Tiruchi on the night of July 26, 2006, following the incident of an armed gang freeing two prisoners, both Srilankan Tamils, from police escort, while they were being taken back in a bus to Tiruchi Central Prison from Pudukottai. Photo: R. Ashok