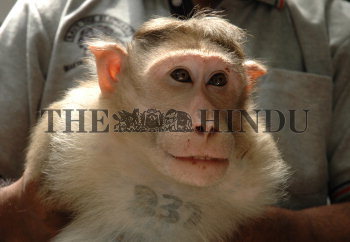 Caption : A Bonnet Macaque that was rescued by People for Animals in Bangalore on July 24, 2006. They said they found the monkeys at Cauvery Wildlife Sanctuary between Sathnur and Sangam. They claim that a research institute had illegally released the 20 animals, which were used for research, into the wild 15 days ago. The animals showed signs of being tagged with numbers on their chests. Photo: K. Murali Kumar