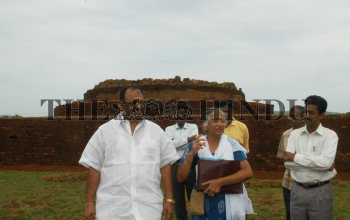 Caption : INTACH's Vizag chapter office-bearers led by Rani Sarma and C.H. Rama Kotaiah explaning the need for preserving the buddhist site at Thotlakonda, near Visakhapatnam, to reporters on July 23, 2006. The site was found during an aerial survey made by the Indian Navy for locating a place to set up a naval base on the coast. This resulted in excavation at the site during 1982-87 and later in 1992-1993. This effort brought to light Buddhist Sangharamas that flourished from 3rd Century B.C. to 3rd Century A.D. These finds have great importance for the study of Buddhism in India as they are distinctly different from the Buddhist finds elsewhere in the country. Photo: C.V. Subrahmanyam