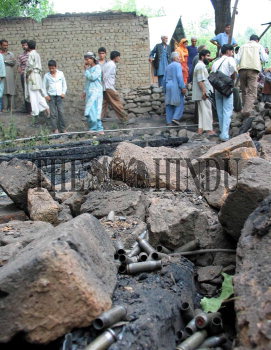 Caption : Kashmiri women wailing near her damaged house, which is damaged during a gunbattle between militants and security forces at Bandipora near Kashmir on July 17, 2006. Two militants are killed and three residential houses are damaged in the long gunbattle. Photo: Nissar Ahmad