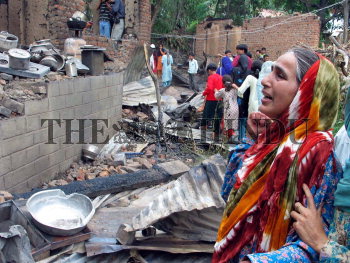 Caption : A Kashmiri woman wailing near her damaged house which was damaged during a gunbattle between militants and security forces at Bandipora some 70kms north of Kashmir on July 17, 2006. Two militants were killed and three residential houses were damaged in the long gunbattle. Photo: Nissar Ahmad