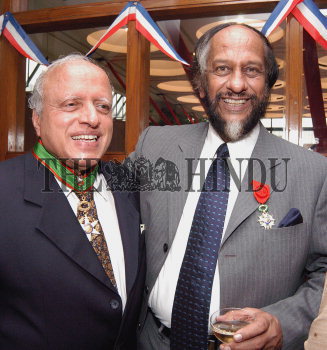 Caption : Recipients of the French Government Awards, Prof M.S. Swaminathan (left) and Dr R.K. Pachauri, during the award ceremony at the French Embassy in New Delhi on July 14, 2006. The French Ambassador Dominique Girard (not in picture) conferred the 'Commander of Agricultural Merit' honour on the agricultural scientist M.S. Swaminathan, the 'Officer of the Legion of Honour' on Ela Bhatt, founder of the Self Employment Women's Organisation (SEWA) and R.K. Pachauri, Director General of TERI and the 'Knight of the Legion of Honour' on Father Cedric Prakash in recognition of his selfless social work in human rights. Photo: Kamal Narang