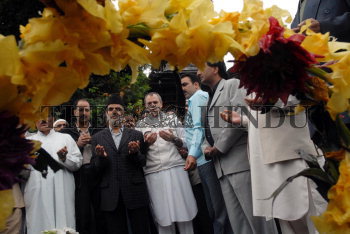 Caption : Omar Abdullaha, National Conference Party President and MP lays a wreath on the grave of a demonstrator killed 75 years ago at Mazar-e-Shohda (Martyr's graveyard), in Srinagar on July 13, 2006. APHC has called for a general strike on July 13 to mark the 75th anniversary of the killing of dozens of demonstrators who were protesting against a ruler in Kashmir. Photo: Nissar Ahmad.