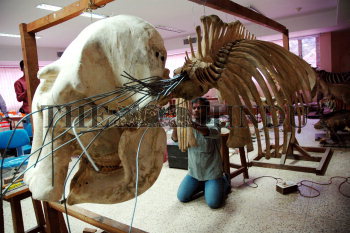 Caption : Shankar, the wild tusker, who had been captured in Bira Ramachandrapur on March 01, 2006 and tied up with chains and kept over there for few days as showpiece. Finally it rescued and later on expired in Chandka forest on May 17, 2006 during his rehabilitation. Then the authority of Regional Museum Natural History have collected the skeleton and now preparing to give it a shape for the viewers on the museumâs first anniversary in Bhubaneswar scheduled to be held on August 10, 2006. Photo: Ashoke Chakrabarty