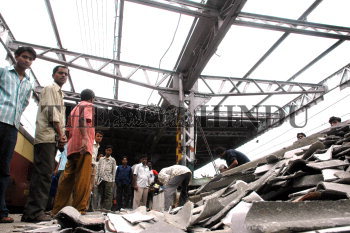 Caption : Railway workers clearing the wreckage at Mahim railway station which was damaged due to the impact of the bomb blast that rocked the suburban railway system in Mumbai. City returns to normalcy as the train services resumed on July 12, 2006. A series of seven blasts rocked stations dotting the Western Railway service, killing over 180 people and injuring over 500 and bringing Mumbai to a standstill on July 11. Photo: Shashi Ashiwal