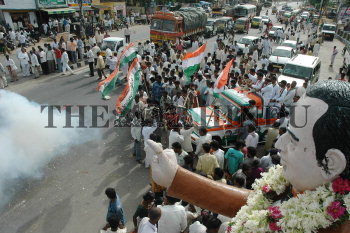 Caption : Malakpet MLA, Malreddy Rangareddy along with Ala Sathemma the newly elected president, took out a victory rally after the Hayathnagar Mandal Election results were declared on the outskirts of Hyderabad on July 11, 2006. Photo: Mohammed Yousuf