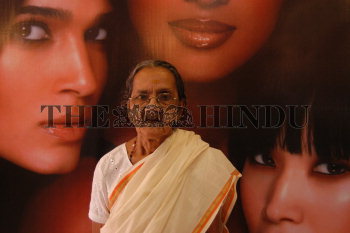 Caption : An old woman, surrounded by images of youth and beauty, watches as life passes by on World Population Day. A scene at Kochi on July 11, 2006. Increasing life expectancy, coupled with better medical facilities and high standards of living, raised India's 60-plus population to 71 million (according to Census 2001), a 74 per cent increase annually. The old-age dependency ratio increased to 16.11 in 2001, a 4.8 per cent increase. The country's total population is well over one billion. Photo: K.K. Mustafah