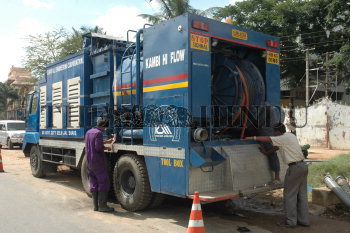 Caption : The Bangalore Mahanagara Palike (BMP) which hired the heavy duty suction machine 'KAMBI' from Delhi Jal Board to clear clogging in the in accessible stretches along the storm water, being pressed into service on Bangalore-Mysore road near Rajrajeshwari Nagar gate in Bangalore on July 09, 2006. KAMBI, the vechile which used in De-choking