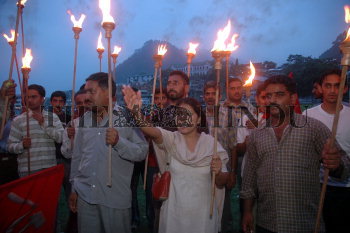 Caption : CITU activists on a protest rally at Chamba, Himachal Pradesh on July 08, 2006, against the atrocities by henchmen of contractors on workers employed in the construction of Chamera-III hydel project on Ravi river. Photo: Sandeep Saxena