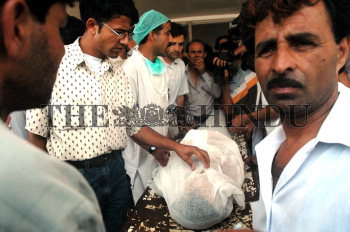 Caption : Relatives carrying the dead body of Jammu and Kashmir former MLA Ghulam Nabi Dar of National Conference (NC) at SMSH Hospital in Srinagar on July 08, 2006. Ghulam Nabi was killed when militants attacked a rally in Kulgam of south Kashmir. The rally was organised by former Minister and leader of the National Conference party Sakina Itto, to celebrate recently granted tehsil status by State Cabinet. Four civilians were killed and more then 20 others were wounded in the attack. Photo: Nissar Ahmad