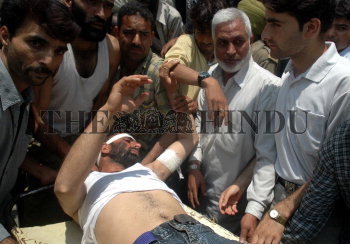 Caption : A blast victim being carried by people and police from an ambulance for treatment at SMSH Hospital, in Srinagar on July 08, 2006. The mishap occurred when militants attacked a rally in Kulgan of South kashmir, in which four civilians are killed including a former MLA of National Conference and dozen others injured. Photo: Nissar Ahmad